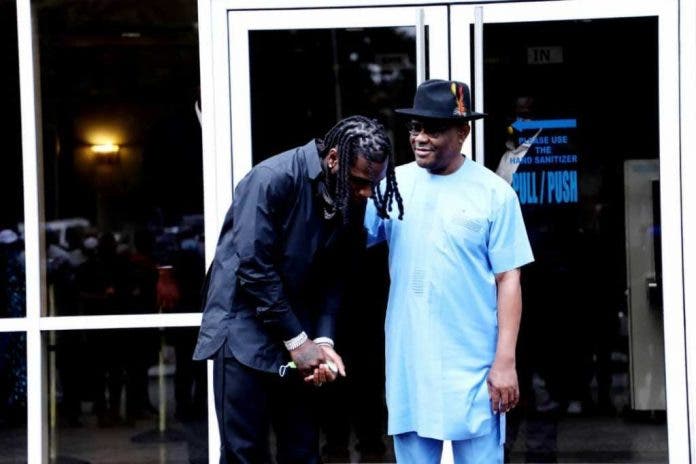 It was reported that the state organized a homecoming ceremony for Burna Boy after his album ‘Twice as Tall’ won Best Global Music Album category.

The Governor while welcoming Burna Boy and his parents on a courtesy visit at the Government House, Port Harcourt described the Grammy award-winning Afrobeat singer as the pride of the state.

The governor also encouraged Burna Boy to continue making the state proud even as he promised to do anything to promote him.

Speaking during the end of the event, the Governor also promised to give artistes who performed at Burna’s Homecoming Concert in Rivers State N10 million each.

The Grammy award winner, Burna Boy, has described the reception by Rivers State Government as the biggest honor bestowed on him since he was born.

Burna Boy said this during his visit on Saturday to Rivers state.

The singer, who recently won Grammy 2021 for Best Global Album was received by Governor Nyesom Wike in the government house.

Burna Boy appreciated Governor Wike for taking out time to honor him.

Wife of the President, Aisha Buhari, is expected as the Special Guest of Honour at the final of the Principal’s Cup scheduled for the Moshood Abiola National Stadium, Abuja on Tuesday . Minister of Youth and sports Development, Sunday Dare, will also grace the event, before proceeding to Lagos to watch the Super Eagles last AFCON qualifier against Lesotho at the Teslim Balogun Stadium. Director of Grassroots Sports, FMYSD, Dr Ademola Are, said, “The Principal’s Cup, which was revived by […]